Growing up in South Central Manitoba I wouldn’t have usually told people that the area I grew up in was exactly overflowing with hunting and fishing opportunities. My views on my “home region” have changed as I’ve gone deeper into hunting. Two years ago I was able to film my first turkey hunt for HuntFishMB (Travel Manitoba). And while I had filmed numerous waterfowl hunts up until this point, I had never pursued (with camera or gun) an animal any bigger than a duck or goose. To this day, I can vividly remember the moment when my friend and fellow hunter, Ryan Suffron made a call and the turkeys immediately responded. Instantly my body started vibrating and I cannot even explain the adrenaline that was coursing through my veins. Shortly after, three tom’s had strutted out, and if it weren’t for the tripod my camera was resting on, I don’t think we would have gotten any usable footage from that moment. Without hesitation Ryan lifted his shotgun and proceeded to drop the lead bird. From that moment, I realized that game hunting gives the participant (or cameraman) a rush of emotion and adrenaline that I had yet to feel from any fish.

After finally acquiring my PAL and Hunters Safety, I decided it was time to dive deeper into this hunting thing that I constantly surrounded by. I started off my hunting career like I did with my videography: shooting ducks and geese, but it was time to revisit this goofy looking bird that I had some strange new-found obsession with. This first turkey experience took place twenty minutes from my doorstep, and the fact that I was blind to such an incredible and nearby resource is still remarkable to me.  At this time wild turkey hunting is a Manitoba-resident only activity, which is a bit of an ace for any Manitoban turkey enthusiast or rookie. Overall, this means a lot of birds and less hunting pressure, and a great resource for all the new hunters (like myself) out there! While fishing is a bit easier to pick up and do on your own, I felt much more confident to get a friend to guide me throughout this experience. Not only was this a great way to learn the ropes, it also stacked the odds in actually getting a bird. In past conversations with my good friend Dino Branfield, he had mentioned, “anytime you want to shoot your first Turkey, just give me a call.” I couldn’t think of a better person to embark on my first Turkey hunt with.  Dino knows every birds name, phone number, current residing address, and favourite flavour of ice cream in South Central Manitoba. I’ve decided to give Dino the nickname: “The Turkey Whisperer,” which is definitely not overly original and I’m sure some other extremely grateful rookie has already titled him that.. BUT he really does know a ridiculous amount about the Manitoba turkey populations. From the South East corner, To the Pembina Valley, up to the Number 1 Highway and beyond…if Dino hasn’t hunted the area, he knows how many turkeys live there and who is hunting them now.

We were based out of Morden as our hub for two days of hunting while I traveled back and forth from Gretna each day. Dino recommended Rock’s Bar and Grill & Hotel to all of his guests, a great location with Gobblers just minutes away. Our focus for the two days was the Pembina Valley and the surrounding escarpment. Each morning the drives were filled with tales of turkey ‘hits and misses’ and so much information that I couldn’t possibly retain, but I’ll try to relay as best I can. Just like any hunt location is everything. Doesn’t matter if you have the perfect call, wind direction, 300yd accuracy…if the animals aren’t there you’re just wasting your time. One of the main take home points I learnt from this is a food source is key! These Manitoba populations of turkeys may just be the farthest north ‘Thunder Chickens’ in North America, and that’s pretty crazy to think about. Being that we have some pretty brutally cold winters, these birds need a really good food source. The main go-to food source for these birds are Feed Lots. So basically these turkeys live off of cow’s leftovers for the Winter and as Spring comes, these birds will start to disperse, but never too far from where they’ve spent the cold months relying on this guaranteed food. In my opinion, you’ll save a ton of time if you can narrow down the best and season-appropriate location.

Day 1: There isn’t too much to say about what happened in the blind, other than the fact the birds fooled us. While we thought we were on the “X” the birds didn’t agree. We could hear them gobbling just a hundred yards over the hill, but they wouldn’t commit and come towards our decoys. Not discouraged we made a game plan for day two, to head out from the belly of the valley and onto the escarpment where Dino’s friend Collin had scouted that night before.

Day 2: Although I was mentally prepared to hunt the next 10 days to harvest my first turkey, you could say I just had a good feeling. Collin had told us that he had seen three tom’s walk down this trail at 7:30AM the day before, and that is where we were going to set up. We were all setup by 6AM. Then as 7AM rolled around we heard some gobbles as the turkeys left their roost (where they sleep at night. They sleep in trees, funny…I know).  The way our spread was setup, the turkeys would have to walk down from where they were roosting and then make a 90 degree turn to the trail that lead to the decoys we had set up that morning. Just like clockwork at 7:10AM we saw the hen leading the way and walking towards this intersection. The turkeys would keep walking straight towards freedom, or make a right turn and walk into our target line. At this point, we knew the turkeys weren’t far, and they were closing in on us with every passing minute. And after all that, the hen decided she was going to take no part in any decoys and continued to walk straight past the intersection. We thought we had lost. Why would the tom’s that were following behind leave the real thing for a few plastic decoys 100 yards away? Well, wouldn’t you believe it, but by some incredible calling from Dino, the tom’s decided they were going to take a right. As soon as those tom’s peeled my way I knew it was game time. All those emotions from two years ago were back and then multiplied by 10…now it was my turn. Dino called, and they replied. Dino called again, they replied again. They were now in range, and Collin (sitting beside me in the blind), said “if you have a shot, take em’!” The lead tom was no longer puffed up and strutting, and my mind was racing. I was thinking about EVERYTHING. Were my five cameras rolling? Was my safety off? Did I leave the stove on? Am I going to miss my shot? Before I had time to think much longer, my finger squeezed the trigger and my first turkey dropped. Wow, what a relief, and what a rush. Instantly, I had this huge charge of emotion that overflowed into the biggest smile mixed with the sweetest verge of tears. What a moment! AND to have been lucky enough to capture it on film. I am so so grateful. I wish you guys could see it up close and personal, but this was truly a beautiful bird weighing in at 20.6LBS it was a big, big Thunder Chicken.

I absolutely cannot express how thankful I am for Dino and Collin showing me the ropes and putting in the time to put me on my first wild turkey. I have so much respect for this sport, for the guys that helped me achieve this, and for that bird. I’ll have you know, that first turkey breast I fried up made some of the best stir fry I’ve ever eaten. You might say it’s because I harvested the animal myself, but the other four people that ate the stir fry also agreed it was delicious. I’m so thankful for the guys willing to help me out and that bird that decided to take a turn down the right trail. Oh, and I should be receiving my Manitoba Master Hunter award in the mail any day now!

For your chance to hunt or fish with Dino “the turkey whisperer” make sure to check out: http://www.nelsonvilleoutfitters.com

For more info on hunting/fishing in Manitoba visit: http://www.huntfishmanitoba.ca

Explore my other blogs 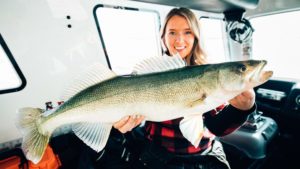 It’s been one incredible year with Sam! I asked her what she wanted to do for our anniversary….She said, fishing for Walleyes with Icebound Excursions 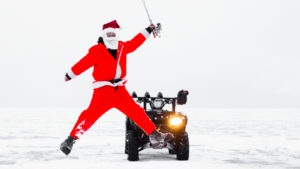 IT’S CHRISTMAS TIME!!! Santa brought cheer to the people of Lake Winnipeg. While the Walleye fishing may have been slow, it was made up for 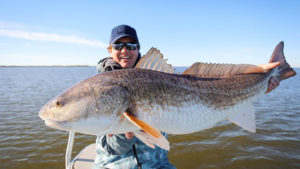 Bull Redfish in New Orleans, Louisiana has been a bucket list trip for me for quite some time. Earlier this year my friend Charley invited