Fishing for Giant Freshwater Drum on the Whitemud River

Fishing for giant freshwater drum has become a popular experience on numerous rivers across Manitoba.As a kid, I remember flipping through a Manitoba fishing publication one Sunday afternoon and saw that there was a fishing derby coming up the following weekend close to home. I was probably 13 or so at the time. I showed my dad, it just outside of Portage La Prairie there was a place called the Whitemud River and they were have a Freshwater Drum tournament. That’s where my relationship with the River began. My dad, my buddy troy, and myself loaded up the following Saturday morning and headed just north of Westbourne, Manitoba to Sportman’s Corner campground (they were the ones putting on the event). While many of the competitors were out fishing out of boats, we didn’t have the luxury so we decided to fish off the public docks at the campground. To our surprise we weren’t at a disadvantage at all, we were hammering fish from shore. Carp, Bullheads, Drum…the this river was loaded! While we didn’t come home with any prizes that year our eyes were opened to the potential of this river…and memories were made!

What makes the Whitemud River so good is what it’s connected to, flowing into the massive ocean that Lake Manitoba is, in the spring time it is a magnet for fish. Early April the river starts to fill with a massive run of suckers, shortly followed by Walleyes, Carp, and Drum. The tournament is timed quite perfectly on the May long weekend to ensure anglers a river full of fish. The fishing is as basic as you want it to be park your boat (or park yourself on a dock), tie on a pickerel rig (or slip sinker rig), load it up with either nightcrawlers, minnows, or shrimp…cast it out and wait. It is relaxing as fishing gets!

My father and I were back the following year, knowing what to expect and setting out sights on a prize this time. While the first day was a great success with multiple masters angler (24 inches or bigger) and lots of fish, we weren’t on the leader board. After day one the current leading drum was over 16lbs!! A beast of a fish. Sunday morning came and we were back on the docks with dreams of a fish that would surpass that 16lb 1st place position. I sat patiently at the end of the dock when another fish decided to suck up my gift of a glob of nightcrawlers, I set the hook and was greeted with screaming runs. At the time I was certainly under powered with a medium power spinning rod and 10lb monofilament line, but I wasn’t going to lose this fish…first the fish ran to the left, and then the fish ran to the right. At this point I had to warn anglers on the docks beside us of what was swimming their way. After a few tense minutes the fish was finally about to surface beside the dock…it was a drum! A giant! My dad quickly netted the fish and we lost our minds! I had no idea these fish even got that big. We quickly brought the fish up to the scale to have it quickly weighed and measured surround by the group of spectators that had quickly gather from all the commotion. The fish hit the scale, 21lbs 3oz…the owners said this was the biggest fish they had seen in over 20 years. With adrenaline rushing through my veins we quickly measured the fish at 33 inches and put it back in the water for the release. Any time you catch a fish of that calibre you can assume it’s old, paired with my under geared fishing tackle this fish was spent, after an hour and a half of trying to revive this fish, she.was.dead. Unfortunately with how the rules were set, the fish had to swim away to be counted. While the fish didn’t swim away, my excitement of winning did swim away. I was sad about not winning, but more sad about the passing of this magnificent fish. We went home happy with the fishing, but quite disappointed at the events to end the day.

Finally, back for our third year, we’ll keep this short and sweet. We won! We were lucky enough watch a 17lb class fish that locked up 1st place for my dad and myself. Once again another memory that was made on the Whitemud River.

Fast forward ten years later. “Hey Dad, want to go to the May Long Whitemud Derby? We’ll make a video of it” Without hesitation he agreed and we were back to the river. I’ll let you watch the video linked below to see how we did.

The Whitemud River is an incredible fishery just 40 minutes from Portage La Prairie in Manitoba’s central region. A great fishing location for someone with a smaller boat or just looking to do some shore fishing. This is absolutely a great destination to get someone hooked on fishing! Just another one of Manitoba’s gems.

For more info on hunting/fishing in Manitoba visit: https://huntfishmanitoba.ca

Explore my other blogs 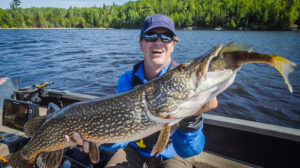 Most Walleye Challenge (A Pike Ate My Walleye!)

It’s time for another head to head Walleye challenge against Clayton Schick Outdoors. Clayton and I decided to do a one day, eight hour fishing 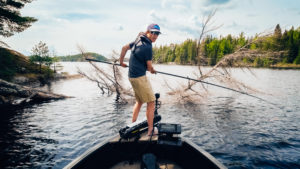 SHALLOW SPRING CRAPPIES! My favourite time of year to catch them. Nothing beats seeing that bobber go down. If you have kids or newbies you’re 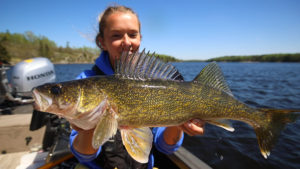 Which is better for Walleye: Artificial or Live Bait?

Which catches more Walleye….artificial or live bait. Sam and I go head to head to try to find an answer! Another beautiful day on Lake